Seedlings on a Sunday

What better way than to spend a rainy Sunday afternoon planting out a group of gooseberry sprouts into their own little seedling pots.

A clump of greenery had recently appeared in one of the garden beds. I had originally thought these to be basil plants as there had been a plant is the same spot last year. On closer inspection, and after asking Mum, they have turned out to be gooseberry plants. As many of them had now developed their third leaf, it was the perfect opportunity to give them a bit of space of their own.

I sat and made some of the seedling pots that I can now just about make in my sleep. I started with about 20 and thought that there would be enough. Not likely. I know it would have been easier to actually sit and count how many little sprouts there were, but they were so intertwined that I just kept guessing. After a few trips between the table, to make more pots, and the garden, to plant them out, I have ended up with 44 little seedlings. 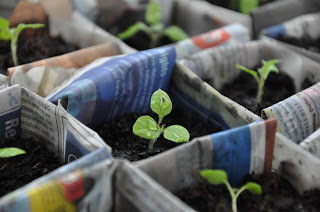 Each has been given a good drink and is about to be placed in the little hothouse to get a little bigger and stronger. I have some friends who have already asked for a plant or two, and I am sure that some of these will make their way to Sow. Give. Grow.

We have just started a new little project over at Sow. Give. Grow. Head over and read all about Giving Day. I would love you to leave a comment if you think this is something you might like to join in. Pass it on.

It has been a great way to end the weekend.

Email ThisBlogThis!Share to TwitterShare to FacebookShare to Pinterest
Labels: garden, sow. give. grow.